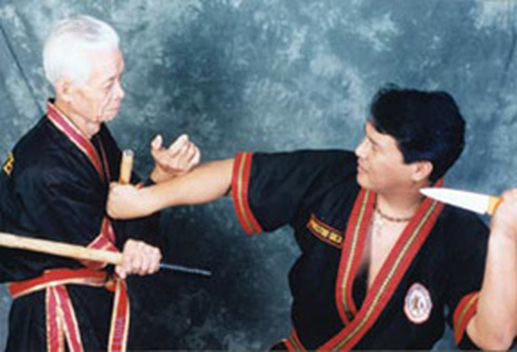 In 1937, Grandmaster Benjamin Luna Lema founded Lightning Scientific Arnis International in the Philippines.  He taught the art of Arnis to the Philippine military who used their skills in Arnis to fight against the Japanese occupation in World War II. When he returned from military service, he was requested to teach Arnis to the Manila Police Force. He dedicated the rest of his life to teaching and promoting his world renowned personal fighting system derived from various classical styles of Arnis that he learned in his province; Tercia, Serrada, Cadenilla, and Espada y Daga.

Grandmaster Benjamin Luna Lema was one of the most famous Grandmasters of Arnis in the Philippines, whose legendary speed and power was both respected and feared by his peers. He fought in the legendary NARAPHIL "Masters sparring division" in 1979, remaining undefeated in both competition and actual combat throughout his entire life.

Grandmaster Rico Acosta has studied the martial arts continually since the age of five and has been teaching for more than 30 years. He trained in the Philippines with Grandmaster Benjamin Luna Lema, Nuno Mataw Guro ESGM Vicente Sanchez and many other notable Grandmasters of Arnis. In the year 2000 he was promoted to 10th Degree Black Belt in Lightning Scientific Arnis by Grandmaster Benjamin Luna Lema, and he received an award for "Best Maestro/Guro" from PIGSSAI in Manila. In 2001 he produced an instructional video on Lightning Scientific Arnis with Paladin Press, with the approval of Grandmaster Lema. In 2004 he was promoted to the rank of 10th degree Black Belt in Kali Arnis International by Nuno Mataw Guro ESGM Vicente Sanchez. Grandmaster Rico was one of the featured instructors at the 3rd FMA Festival in the Philippines in 2005. He was inducted into the UFOMA Hall of Fame in 2010, and in 2015 Nuno Mataw Guro ESGM Vicente Sanchez gave him a certificate of recognition promoting him to Grandmaster - 10th Degree Black Belt w/t Gold trim in Lightning Scientific Arnis.