Nuno Mataw Guro ESGM Vicente Sanchez was a long time friend and student of Grandmaster Benjamin Luna Lema, and he was one of the highest-ranking Senior Masters of Lightning Scientific Arnis International. He dedicated most of his life to propagating the Filipino Martial Arts. Nuno Mataw Guro ESGM Vicente Sanchez​ was one of the founders of the Philippine Council of Kali Eskrima Arnis Masters and head of his own system, the Kali Arnis International Federation. He was one of the most respected Grandmasters in the Philippines and actively promoted art of Kali Arnis until his untimely passing. 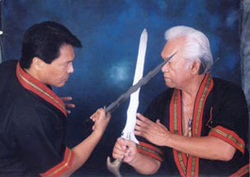 As a professional stuntman, he was called upon to do various movies throughout the years. During the filming of "Sticks of Death",  Nuno Mataw Guro ESGM Vic Sanchez met the legendary Grandmaster Benjamin Luna Lema of Lightning Scientific Arnis International who was known and respected as a great fighter. They built up a close friendship and great respect for each other through the years, until the passing of Grandmaster Ben Luna Lema.

Studied in University of the East College of Commerce (under graduate)
Founder and President of Kali Arnis International (KAI)
Teaching and propagating Arnis for more that 45 years.

Contributed to many major activities in Arnis: